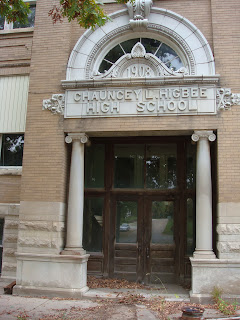 Now I am in the seventh grade...no longer in the East School Building but back where I started in the first grade!  A new elementary school in the South part of town has been built and the Junior High...seventh and eighth grades...are now in the same building as the High School.  The Junior High has taken over one whole floor...the first floor of the building and there are eight classrooms....four per grade..one for English; one for Math; one for History and one for Science.
It seemed so strange to be having seventh grade English in the same class room where I had attended first grade...just with larger desks! And if I hadn't mentioned...it is the same building where my mom and dad attended high school!  Seventh grade was a whole new world...many of my friends were becoming interested in BOYS.  I was not..I was pretty immature socially and physically.  But it was the beginning of "growing up".  Basketball games, hayrides, an occasional school dance..our moms had started a "dance class" for all of us...boys and girls.  I remember we learned all the latest dance fads!!  How awkward!  Standing in two lines facing each other and pairing off!  Our moms thought they were helping us through the Puberty years with these little plans...but for me it was sheer misery.  I had not developed any social skills and having to participate in these ordeals did not really help ME!  Fortunately as I have previously mentioned, I had a pretty terrific mom and she realized my discomfort so she wasn't as insistent as some of the moms about my always having to be a part of these "wonderful" occasions!
As my life turned out, I became a Junior High/Middle School teacher...and from my own experiences, I had great sympathy for my students!!  I really believe there does not exist a more difficult age for boys or girls than the preteen years...so many differences physically, socially, even mentally..and yet the sensitivity that one feels they are "the only one to feel" this way!!!
Posted by Jaye at 5:30 AM 2 comments:

This week the blog, Our Beautiful World, has selected the word "November" to inspire pictures.  November is a very bittersweet month for me...
November is the traditional month for Thanksgiving in the United States.  Thanksgiving falls on the fourth Thursday of the month...
The first year we were married, we were stationed in Anchorage, Alaska..so we had to make our own Thanksgiving celebration with friends.

My grandmother always had Thanksgiving dinner when I was a kid growing up and Mom always did Christmas....these traditions continued even into our early married years, getting together at Grandma's.  She was a terrific cook which we all loved...but her home was a real museum full of beautiful antiques, so when our kids were little, it wasn't as relaxing until one of the dads took them all outside to play!!
I have taken up the tradition of Thanksgiving for my family here in Texas. And my brother in Illinois does the same for the family up there.  This is my son-in-law's favorite meal...a big meal...then an afternoon of football!  So my daughter has been taking notes and is doing Thanksgiving for the first time this year!  Everyone has their assigned parts of the meal to bring, but she will be doing the turkey...the star of the show!!

November is bittersweet because, much as we love getting together with family, this is the month when I lost my sister... ....and my mother a few years later...
...then another happy occasion during the month of November..happy for me anyway... is that my birthday is this month!!!


Even though it is November, I forgot to share childhood Halloween memories while still in October.  On another blog I where I write and post pictures, Our Beautiful World, I told of the Halloween contests and parades in my hometown, but didn't talk much about the tradition of trick or treating!
In my youth, as now, Halloween was the time to dress up and see how many treats you can get!!  Back in the forties and the fifties, we didn't have the concerns of sicko's doctoring the treats with dangerous things, and, being from a small town, we knew everyone anyway.  So we would often get homemade treats...popcorn, homemade fudge, etc.  We would travel the town in groups of five or six..when we were old enough to go alone...from about with eight or nine through age twelve.  As younger kids, four-seven, our parents would walk us around to a few houses...but no one dressed up babies or toddlers and dragged them around!  Whoops...that sounded kinda' crabby old, didn't it!! Oh, well!!

It was also customary to go several nights, three or four at least...we could cover all the town that way!  And we could share the best places with other kids that had been the night before!  Everyone seemed to understand this practice and go along with it.  Everyone would try to guess who was who dressed up, and all made quite a town party out of the holiday...probably most people really had no idea of the origin of the "Hallows Eve" and its real purpose. I've given you a link to look up some interesting facts if you wish. I know I didn't really know until I was much older...it is really a fascinating subject!
Anyway, there was one memory I have that relates to our town's tradition of multiple-night trick or treating....When I was in Junior High we visited the home of a rather new comer to town, and not aware of all our local "traditions".   We were visiting her a couple nights before the 31st and she rather rudely let us know that she had no treats, that it was NOT Halloween yet, and if we didn't get off her porch, she would call the police!  Well...little did she know that some of my friends would take the "TRICK or treat" part very seriously...I was not a party to the "trick", but knew what this group of boys had planned!  I am almost embarrassed to relate what they did...but I have started so will continue..they collected all the old dog poop they could find and scattered all over her porch!  Now, this sounds very vandalistic, but back in the Fifties, this was not considered extremely terrible!  There were a lot of innocent tricks done in those days...never any real harm to private property...just nuisance, more along the t-p-ing of houses today.
I guess I am getting preachy now, but I do think some relatively innocent tricks are sometimes taken too seriously!  Believe me, I am not for bullying or destruction of property...there way too much of that, but I do think that there are some very righteous people out there who need to lighten up!